East Timor Law and Justice Bulletin: A Note on Sexuality and Land Rights in East Timor

East Timor Law and Justice Bulletin: A Note on Sexuality and Land Rights in East Timor: ETLJB 21 July 2019 -  When the Constitution was being drafted, an early draft included in the non-discrimination provisions, a reference t...
Posted by Editor at 12:38 PM 3 comments:

East Timor Law and Justice Bulletin: Chapter 1 East Timor Land Law 2017 Objects and Def...: WARNING HUMAN_MODIFIED MACHINE TRANSLATION  - Law No. 13/2017of 5 of June SPECIAL SCHEME FOR THE DEFINITION OF OWNERSHIP OF PROPERTY CHAPT...
Posted by Editor at 12:37 AM 1 comment: 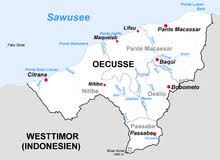 Community of Haemnanu Sub Village of Oecusse and community of Manusasi Village of kefa of Indonesia have been fighting each other for a week over land use in border zone of the two countries.

Elias Abi, from Haemnanu Sub Village, said the two communities had been in dispute for years and it escalated recently because community from Manusasi of Indonesia entered Timor-Leste’s territory and snatched the farmland of Timorese in Haemnanu, therefore, the two parties engaged in confrontation.

“The community and local authorities including Border Patrol Police Unit went to border zone to resolve the problem on September 3, 2018, but the community from Manusasi came and stoned us and threatened us with sharp weapons,” Abi said via phone on Tuesday (04/09).

“The border line has been set up and they entered our territory and wanted to take over our farm land,” he said. Timor-Leste and Indonesia have not indeed resolved two land border segments in Oecusse and Kefa of Indonesia until now leaving communities in the border zone at risk of conflict.

The authorities of both countries have included local indigenous communities of the border zone in latest negotiations to resolve the problem.
Posted by Editor at 4:21 AM No comments:

East Timor Law and Justice Bulletin: Leis das Terras English translation please?: Good day readers, May I ask if anyone has an English translation of the new land law, may I know where it is or may I have your copy ple...
Posted by Editor at 9:04 AM No comments: